I HAD TO ADD THE HILLARY CLINTON TREE TOPPER PHOTO Because I am not the only one who is going to see this.

It was the BEST BOARD GAME EVER!  I see they have a new version, but it can't be as good and I don't want to mess with my childhood memories.

Also on the top 3 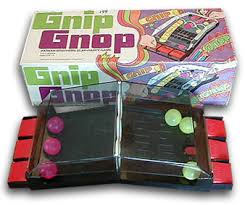 DO YOU THINK AL FRANKEN KNEW HE WAS SO EXPENDABLE?  Don't get me wrong, I'm glad Al Franken is going to be resigning from his seat in the Senate.  But I always wonder when someone is forced out by his own team because he is politically expendable how the expendable feels when it's done.  Because if you think Al Franken would be out if he lived in a state with a Republican Governor they'd be telling him to get out?  The answer is obviously NO.

AND IF ROY MOORE DOES WIN, I HAVE A PREDICTION AND SOME ADVICE FOR THE GOP He should be met immediately with ostracization and told he is not welcome loudly and repeatedly until he resigns.  Then a Republican Governor can replace him with another Republican and all the parties get to crow about how much the LOOOOVVVVEEEE women and the balance of power remains the same.  Ta-DA!

SO WHAT DO YOU WEAR TO A DAY OF RAGE ANYWAY?  The leadership of terrorist organization Hamas is calling for Palestinians to rise up for a "day of rage" Friday.  What to wear, what to wear... I find it remarkable that useful idiot college students would support a group that calls for an intifada over a foreign nation's recognition of the existing capital of Israel.

DON'T CALL IT A COMEBACK.  YET.  How can one not think of a juiced up Lyle Alzado trying to make a come back to football when you hear that Raphael Palmiero, at the ripe old age of 53, wants to try a comeback to the Major Leagues.  God bless him for trying.  I hope he doesn't permanently hurt himself.

TODAY MARKS PEARL HARBOR DAY  It has been seventy-six years since the most significant military attack on US soil.  On that fateful day in Hawaii, the USS Ward sunk a Japanese midget submarine a full hour before the Japanese attack.  Three years later the Ward was sunk by kamikazes in the Philippines and it's been sitting on the ocean floor since.  Now private funds paid to find the Ward and they've released footage of the once mighty vessel.  It's pretty super cool.

WHAT HAS BECOME OF SELF RESTRAINT?  I read something the other day that said Millenials are bringing back a "Victorian" sensibility with their very strong sense of right and wrong and ability to judge others while deeming themselves non-judgmental.  If so, I say this isn't a horrible development after what we're witnessing from the Baby Boomers like Weinstein, O'Reilly, Franken and Trump.  This column from the Wall Street Journal asks what happened to self-restraint and it's a legit question.

JOHN STOSSEL EXPLAINS WHY HE HATES THE NEW YORK TIMES And after reading this, I'm exceedingly glad I don't pay much attention to the Old Crazy Gray Lady Sitting On a Park Bench Talking to Herself anymore.  This column gives very specific examples of why the NYTimes is simply not worth the effort anymore.

CLIMATE ALARMISTS GET CAUGHT LYING.  AGAIN.  This time over sea levels.  It seems the raw date showed no sea level rise in the Indian Ocean.  Two researchers managed to "adjust" the raw data to make it seem as if THE SEAS ARE RISING TO SWALLOW US ALL.  Two other researchers checked the data and called the alarmists out.